.
There were a lot of announcements about the reform measures in the Finance Minister’s speech in five parts following the Prime Minister’s address. However, we are not going into the details of those here. Let us just look at the numbers which have been presented as part of Atmanirbhar Bharat package of Rs.20 lakh 97 thousand and 53 crores, which is 10.28% of India’s GDP for the year 2019-20. For our understanding, all the heads have been divided into five broad categories viz. expenditure from the government exchequer, off-budget funds, revenue foregone, credit with government encouragement and liquidity injection (see the graph below). 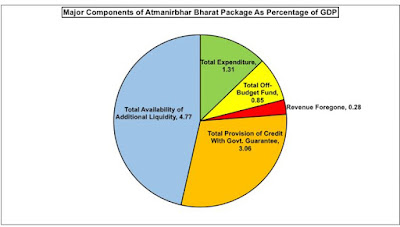 .
However, lower EPF contribution means lower savings unless the government contributes that 2% on behalf of the employees – but, there is no such proposal as of now. If we add these with the potential liquidity injection by the RBI, the total liquidity measure comes to the tune of Rs.9.73 lakh crore, which is 4.77% of GDP of 2019-20. The essential assumption is that this much extra credit would be demanded and actual additional credit offtake would be equal to this to stimulate the economy. But, that would never be the case in a demand depressed situation. In fact, the aggregate supply of liquidity is always demand-driven and credit-led.
.
It is important to remember here, although both availability of extra liquidity as well as expected credit by the MSMEs and the farmers have been added to arrive at Rs.21 lakh crore number, there is substantial overlap and hence double counting. These MSMEs and farmers would take the loan with government guarantee from the commercial banks, NBFCs, NABARD etc. who have been enabled to extend extra credit. From the point of view of investment, growth and employment generation, the money would be invested by the MSMEs and the farmers once and not twice. Even if we believe that out of total Rs.9.7 lakh crore additional loanable fund, they take Rs.6.25 lakh crore amount of extra loan using government guarantee and make investment and the rest of the loanable fund is borrowed by others (unrealistically assuming full credit offtake) without government guarantee, then the total increase in investment would be of Rs.9.7 lakh crore and not of Rs.16 lakh crore, which is supposed to boost the economy and enhance the aggregate level of activity. If we calculate this way, avoiding the potential double counting, the size of the package according to the government’s own calculations and definitions would be only of 7% of GDP and not more than 10% of GDP.
.
Obviously, under a depression like this, it is unlikely that the actual credit offtake would be equal to the availability of liquidity with the banks and the NBFCs. If there is no profitability, the investors would not demand for credit without which credit cannot be supplied. In order to boost aggregate demand in the market, the purchasing power of people have to be enhanced. However, the point is that even after a catastrophe of this scale, our government has announced a fiscal stimulus package with merely 1.3% of additional government expenditure if the expenditure of other departments and schemes are not reduced to finance this additional spending. Hope, there would be another package to revamp MGNREGS and expand it to the urban areas and to enhance the government health spending substantially as proportion of GDP and so on to boost the aggregate demand in the economy soon. Fiscal conservatism would prove to be treacherous now under the current situation.
.
The author is Assistant Professor at CESP, JNU, New Delhi